My Brain, My Pain (part 4) by Jennifer 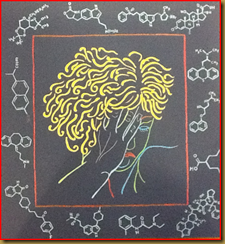 The last phase is called postdrome- medication is on board, and hopefully the pain is subsiding. A person may feel really worn out, have difficulty concentrating, need to lie down or sleep. This phase lasts for several hours or possibly a day. It is necessary to note that overuse of medications can cause rebound headaches. Headaches are widely prevalent and can be disabling. Careful monitoring by a neurologist who specializes in headaches is often needed. There are "headaches diets" online which may be helpful in figuring out if there are foods that may trigger headaches. Finding various ways to manage stress is also essential.

Posted by DBSA Jackson at 8:06 PM No comments:

My Brain, My Pain (part 3) by Jennifer 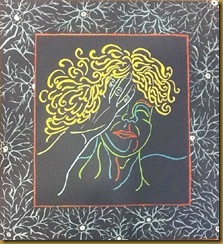 The second phase in the migraine cycle is the pain, it can be moderate to severe in intensity. If it is a migraine- often the senses are heightened, noise is particularly irritating, lights seem much brighter, odors are more pungent, skin may be overly sensitive, and taste may be altered. Neurons are overly excited and the cascade of symptoms intensifies. Pain may be felt as sharp, stabbing, throbbing, or pressure. In migraines, the pain is typically one sided. Applying ice and taking abortive medication may be needed to quell the pain and other symptoms such as nausea. This phase can last from 2-72 hours. Some people, such as I, also suffer from allodynia- where not normally painful stimuli is experienced as painful. Brushing my hair hurts, and sometimes simply a strand of hair falling on my face is painful. The painting above depicts the overly excited neurons that are rapidly firing the pain signals.

Posted by DBSA Jackson at 7:54 PM No comments:

My Brain, My Pain (part 2) by Jennifer 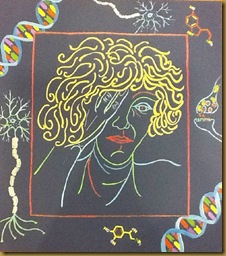 Migraines typically have three phases. The first is called prodrome- (may last several hours or a day before the intense pain starts- sometimes it may only be minutes) a person may become irritable or moody, food cravings may happen, slight variation in senses may be noticed, muscles may start to tense. Headaches/migraines can be triggered by many things- certain foods, aromas, stressful situations, etc. they can be confounded by genetics and medications. Some people may experience an aura- blinking/flashing lights or geometric patterns. Rarely, do I actually see an aura. The picture that I painted depicts the beginning of the migraine. The border illustrates the neurons, synapse, DNA, and chemicals that predispose the conditions for the migraine.

Posted by DBSA Jackson at 7:45 PM No comments:

My Brain, My Pain by Jennifer D. 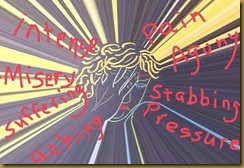 The next four entries will be about my experience with the pain of migraines. For twenty years, I was mistreated for an array of psychiatric disorders that I did not have. I actually had a pituitary tumor in my brain that caused an imbalance of hormones. The fluctuating hormones mimicked mood swings and anxiety. They were misinterpreted as bipolar disorder and generalized anxiety disorder. I was prescribed a multitude of psychotropic drugs, which I responded negatively to. Instead of helping,this compounded my problems. Over the 20 years, I was tried on fifty plus medications. I suffered severely from side effects, which the doctors then added more medications. I was in and out of psychiatric hospitals nearly 15 times for up to 30 days each. Three years ago, I was so drugged that I began falling. I had a mild closed head injury that started a migraine cycle that hasn't stopped. The MRI after the head injury showed that the pituitary tumor was now only slit like. I got a new team of doctors who weaned me off of all of the psychotropic medications, and amazingly I got so much better mood wise. Unfortunately, the migraines have not been easy to control. With my past exposure to medications, typical medications are not effective at normal doses. But, I can't tolerate the side effects at higher doses either.
Posted by DBSA Jackson at 7:31 PM No comments:

Be an Advocate for Privacy for the Mentally Ill 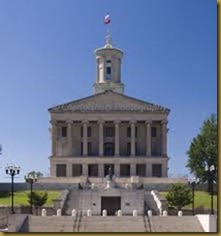 One of the initiatives of DBSA Jackson is to advocate for “a better tomorrow” for the consumers. The case I present to you today causes concern that the stigma toward mental illness is real to our state legislators. I feel it necessary to call attention to the troubling legislation created by our elected officials.

I received the following from Lori Rash, TMHCA:

NAMI Opposes SB2789/HB2979Compromises Medical Privacy Laws Sponsored by Rep. Vance Dennis of Savannah and Senator Brian Kelsey of Collierville, HB2979/SB2789 forces anyone filing a medical malpractice lawsuit to allow the hospital’s or physician’s attorney to have access to their entire medical history. Under current law, a physician’s attorney already has access to all medical records pertaining to medical negligence issues. However, this proposed legislation would force victims of medical negligence to sign a waiver in order to file a complaint allowing the negligent doctor’s attorney to look at their lifetime medical history ‐ even if the medical records have nothing to do with the issue at hand. “Basically, if a person was treated at any point in their life for mental health and substance abuse issues as well as domestic abuse, these medical records would be available to the doctor’s attorneys and could be brought up in court,” stated Keith Williams, President, Tennessee Association for Justice.  The legislation also allows the other side to have secret, private meetings with the patient’s previous doctors and counselors. If someone files a medical malpractice lawsuit against a hospital or nursing home, this law would allow the lawyers to be able to go back and read all about any illness the patient may have had that does not relate to this specific case. This bill is an invasion of privacy and with the primary purpose to intimidate victims of medical negligence and abuse.

Posted by DBSA Jackson at 7:44 PM No comments: Jennifer, Nelly and I visited some wonderful sights in Nashville after presenting in a NAMI/STEP TENNESSEE Summit at Meharry Medical College. We truly enjoyed our time together!

Posted by DBSA Jackson at 10:12 PM No comments:

Going Through the Open Space to a New Life 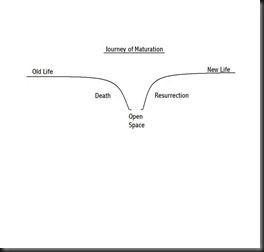 My book, The Two Agreements, is not only about my reinterpretation of the New Testament; it is also largely about my own spiritual journey. That is why I have written at length about the “open space”. The open space is a time when your old life is gone (either because it was “taken” or because you consciously shed it), but you have not yet arrived at your new life. This transformative period can be incredibly lonely, painful, and anxiety-ridden; however, it is also an opportunity to challenge old beliefs. The goal is to learn to trust the process. I have gone through several such periods, the longest being the five years when I slowly and agonizingly sloughed off my fundamentalist beliefs and eventually emerged in my new spiritual life.

Without a doubt, the most difficult aspect of an open space is how utterly isolated you feel. When you left your old life, you did not just lose places, things or jobs; you have left people behind as well. Perhaps you have lost your spouse through death or divorce; maybe your friends have stopped calling because they can’t or won’t understand what you are going through. You may have even been separated from your church community. The key to arriving on the other side of the open space is to realize that you are NEVER alone, for you are never disconnected from God. I have often heard in my ministry groups stories of people who, in their darkest hour, felt the presence of an “Unseen Hand”, a force that kept them rooted to their lives. For some, it materialized as love for their children; for others it was a mere whisper, promising better things to come. Then, others saw the new life of someone who “made it through” and got the hope of their own new life. In all cases, it was the life force manifested, and it most likely saved their lives.

It is also imperative for anyone finding himself or herself in an open space to connect with community. Unfortunately, this often easier said than done, especially for those facing mental health challenges. In my interfaith support groups, I have heard hundreds of stories, many from people who were rejected or ignored by their fellow church members. One woman literally ran to her church after an incident in her home had left her fearing for her emotional stability. She was without transportation, and she asked the women in the administrative office if one of them could drive her to a nearby mental health facility. Instead of helping her, the women backed away, as if she was a leper. One even asked if there weren’t services for “people like her”.

I heard another story, from a Deacon at a local church. Twenty years before, his wife had broken her leg. For days, his phone never stopped ringing, with callers offering prayers for a speedy recovery. They showed up at his door, bearing enough food for an army. The reaction was very different, however, when his daughter was hospitalized with a mental health issue. Imagine his sorrow when the phone rang not once; when no one showed up with food for his family.

Open spaces do not only apply to individuals; larger entities and organizations can also face transitional periods that threaten their very existence. An example that immediately comes to mind is the United States, with its uncertain economic future and political divisiveness. Christianity has also been at a stand-still for some time, and arguably, is regressing. People, particularly the young, have been leaving fundamentalist churches in droves. According to Tony Jones, author of The New Christians—Dispatches From the Emergent Frontier, millions of church-goers have left the church, never to return. Many of these folks were raised in the church; but now, disillusioned, they are walking away, not only from the church’s teachings, but, in some cases, belief in God. And, that is indeed a travesty.

Very simply, whether we are talking about an individual, a country, or a religious institution, the questions remain the same: “Now that all hell has broken loose, what are you/we going to do about it?” – for your old life died, gone and never to return. And, something needs to be done. Then, the follow up question is, “How much do you/we love yourself/ourselves?”— for the spiritual lesson is to love one’s self enough to “resurrect” a new life. Only a genuine love will do.

Posted by DBSA Jackson at 3:17 PM No comments: