Larry Drain publishes a blog named hopeworkscommunity . I am sharing one of his most recent posts.

This is an older post.  It is part a response to a post I read a few days ago from the leader of a mental health organization suggesting too much emphasis was placed stigma.
It is about Robert Emke.
Robert Enke died this past Tuesday. He was a soccer player in Germany. He stepped out in front of a train and committed suicide. 45,000 people came to his funeral. His story is reprinted below.
He brings a face to the idea of stigma. Reportedly he suffered from depression for at least 6 years. He did not want anyone to know. He was afraid of his child being taken from him for one thing if anyone found out. None of his teammates said they even knew.
I have known others who put tremendous energy into hiding their issues from people in their life. I have known many who were convinced that being found out would be the end of a job…. a relationship….or of something else important in their life. Stigma is not just what happens when people find out. It is the fear that drives you to make the most important thing in your life that no one finds out.
It sounds like Enke just ran out of steam. Untreated the depression was getting worse. Getting treatment meant exposing himself in a public manner. He couldnt live with either option. He chose to die.
Stigma is deadly. I wonder how many people refuse to get help because of what they think others will say about them. I wonder how many people put themselves in a pressure cooker of a situation trying to make others think everything is ok when it is not. I wonder why Robert Enke found himself in a situation where the best solution to him seemed death…. I really wonder.
Next time you hear the word stigma think of Robert Enke. And think about how many other Robert Enke's there are. And wonder why it is that so many people should be so scared or so ashamed of who they are and the issues they must deal with in their life.
Read the story below please. And say a prayer for the wife and child of a man who saw no way he could continue to live.
By ZACHARIAS ZACHARAKIS, Associated Press Writer Zacharias Zacharakis, Associated Press Writer – Sun Nov 15, 10:17 am ET HANNOVER, Germany – More than 45,000 fans gathered Sunday at the Hannover stadium for a memorial service for Germany goalkeeper Robert Enke, whose suicide has shaken the country.
"Robert Enke will never come back to this stadium, the place where he conquered our hearts," Hannover club president Martin Kind said at the beginning of the ceremony. "But it wasn't only his success that made Robert Enke so popular, it was the man, his personality."
The 32-year-old player, who played for Hannover 96 and had a good chance of being Germany's starting goalkeeper at next year's World Cup in South Africa, stepped in front of a train near his Hannover home on Tuesday evening. His widow, Teresa, appeared on national television a day later to say her husband had been suffering from depression for six years but did not want it known.
Enke's coffin was covered with white roses and was placed in the center of the field. German politicians and sports stars were also at the memorial, where many of the fans wore black and the club's green, white and black scarf.
Before the start of the ceremony, the fans stood and applauded when Teresa Enke walked to the coffin together with a friend. Several members of the German national team also approached the coffin to say goodbye to their teammate.
In a country riveted by soccer, Enke's death has prompted a debate about whether players receive sufficient psychological support.
Teresa Enke said her husband had kept his depression secret from the public because he had been afraid the couple's adopted 8-month-old daughter would be taken away from them if his illness was known. The couple's biological daughter, Lara, died of a heart ailment in 2006 when she was 2.
Enke's father told weekly magazine Spiegel on Sunday that his son had suffered for a long time.
"I think that his disease did not arise from something inside of him, but was triggered by his life's circumstances," said Dirk Enke, a psychotherapist, who said he tried to talk to his son several times but could not get him to talk about his depression.
In a farewell note, Enke apologized to his family and the staff treating him for deliberately misleading them into believing he was better, which was "necessary in order to carry out the suicide plans," said Valentin Markser, his doctor.
Enke's struggle with depression was not known to his teammates or coaches.
At the end of the ceremony, as Enke's coffin was carried out by his Hannover 96 teammates, many crying fans raised their club scarves.
"During the last days, there was only emptiness and sadness," said Thomas Brauns, 42. "It happened so suddenly. Last Sunday we still saw the game, applauded him … and two days later he throws himself in front of the train."
Enke was buried later in the day next to his daughter Lara in a private ceremony near Neustadt, outside Hannover.
Posted by DBSA Jackson at 9:07 PM No comments:

Scanned with DocScan HD Pro
Posted by DBSA Jackson at 8:41 PM No comments: 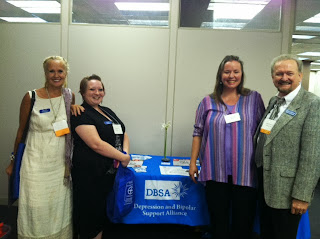 DBSA Tennessee setup an exhibit at the conference on the Affordable Care Act - August 3, 2013.

There's a man surrounded by crickets in the grass

than his own heartbeat

he's sitting with a congregation
of stones

listening to the earth's sermons

oblivious to the beauty of his own solitude

which is a single blade of grass in the evening breeze

by Julia McCarthy
from her collection 'Return to Erebus', 2010

Don Domanski is a Canadian poet who's work I hope will be discovered and cherished by the wider world - his themes are universal - and his poems are not only intensely beautiful, but an illumination in these uncertain times.

Posted by DBSA Jackson at 11:59 AM No comments:

Lynn shares her feelings of gratitude

Lynn's words of gratitude for her new-found family

"the thoughtfulnesses, kindnesses, loving, caring devotion of this group is everlasting to my Spirit! These blessings were not only shared at the celebration of Life at our birthday party recently, but are always present in our large group, as well as in our smaller, intimate groups!....... LOVE ABOUNDS HERE, No matter what we are going through. Thank you, each, for your example of unconditional love we often don't get from "Outsiders", and for your continuing welcoming Spirit!..... Love and blessings of peace to each!

I'm glad it touched hearts..... Because it IS true!

Sent from my iPad
Posted by DBSA Jackson at 1:11 PM No comments: